By, for and of the Citizens of Salem 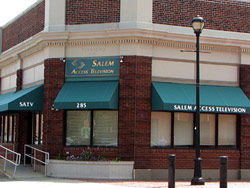 Since 1994 SATV has been offering-training, equipment and support in the art of television production to Salem residents, Salem Schools, Salem State University students, Salem businesses, individuals, families, groups and non-profit organizations. The goal is to train the people of Salem to use the facility to develop their own TV programming to be aired on one of SATV’s channels.

All shows are aired on one of SATV’s three channels, Channel 3 is public access, Channel 15 is educational programming and Channel 22 is government programming. Any individual, group, family, non-profit organization or business in Salem is eligible to become a member of SATV.

A membership lasts twelve months and includes basic TV classes, use of equipment and access to the facility.

Communication, creativity and entertainment in the city of Salem is shared through cable television. Residents of Salem are offered the opportunity to become involved in their local Public television channels.

The programs shown on SATV are as diverse as the community itself. Many programs focus on local information about Salem. They may be educational, political, artistic, cultural, religious or entertaining in nature.

SATV gives a chance to connect with others and share ideas, information and opinions through cable TV. By becoming a member, you not only get access to equipment and training but air time on SATV’s channels as well.